Immediately after passing through the village of Mili as we travel south of Argos and Nauplion (Nafplion) down the east coast of the Peloponnese, we reach the archaeological sites of Lerna and the Hydra Springs. Now surrounded by orange groves, Lerna was once a city amidst an area of marshland with a deep freshwater lake. It was an important settlement in Neolithic times (from around 5500 B.C) and then in the Early to Middle Bronze Age (2500–1250 B.C).

The area is perhaps best-known for its connection to Heracles (Hercules) since it is where he is said to have exterminated the Hydra, the nine-headed water snake sent by the goddess Hera to kill Heracles, in the second of his Labours. Its earlier legends include those of the gods, Poseidon, Hades and Dionysus. The quest for the truth behind the tales has captivated the interest of geologists and archaeologists alike, and there is still much to discover here.

To the ancient minds, the origins of the springs at Lerna – like many bodies of water in ancient times – had to be the work Poseidon, the god of the sea. So these springs were a gift from Poseidon when he courted Amymone, one of the daughters of Danaus, king of Argos. Their son was Nauplius, meaning ‘navigator’, which became the name for the port of Argos.

Danaus and his twin brother Aegyptus were the sons of Belus, a mythical king of Egypt, who gave the kingdom of Libya to Danaus, and Arabia to his brother. Aegyptus had fifty sons, mercifully from different wives, whereas Danaus had fifty daughters. Thus Aegyptus was the more powerful king. He conquered Egypt, then plotted to kill Danaus and take his lands. Danaus escaped to Argos with his daughters, the Danaids, with Aegyptus’ sons in hot pursuit. To save himself and Argos, Danaus offered his daughters as wives to them. On their wedding night, all but one of Danaids beheaded their husbands and threw their heads into the Lake of Lerna (Alcyonian Lake).

The deadly, bottomless lake was believed to be an entrance to the Underworld. Dionysus, god of the wine harvest, reputedly entered and freed his mother, Semele (yet another mortal wife of Zeus) from Hades, bringing her back to life. This was also the venue for the worship of Demeter (goddess of the harvest) in the ancient Lernaean Mysteries, similar to the rituals that took place at Eleusis.

The story of Heracles’ second Labour goes that the Hydra had one immortal head and eight mortal ones. For each head chopped off, two grew in its place. Heracles stopped the severed heads growing again by using a flaming torch to burn the necks. Then he buried the immortal head. When he crushed Cancer, the giant crab that bit him to protect the Hydra, the crab was saved by Hera.

The legend is familiar, but the interpretations differ. Was the Hydra a multi-headed creature, a mighty water snake which was difficult to kill or a metaphor for geophysical phenomena? Perhaps it was a portrayal of the giant moray eel whose double set of jaws may have been mistaken for an inner head; eels are frighteningly resilient, able to live for hours outside water and can only be killed by beheading. (Mediterranean morays, a bane to local fishermen, are common on the coasts of Greece.)

An alternative theory is that the Hydra’s ‘heads’ represented the springs which flowed into the lake, and Heracles task was to re-route the waters either to drain the lake and solve the malaria-bearing mosquito problem or to irrigate the surrounding land for cultivation. This would be in keeping with our hero’s later feat of flooding the Augean Stables.

Interestingly and with respect to astronomy, the northern end of the constellation of Hydra borders Cancer (the Crab). The crab co-existed with Hydra in Lake Lerna, thus the myth could also be a celestial metaphor – or vice versa.

The Lernaeans, whose ethnic origin is still uncertain, were a peaceful community of traders, tradesmen and farmers. They crafted various styles of pottery, later using potter’s wheels, and importing wares from across the Aegean and the Balkans.

American archaeologists, excavating Lerna since 1952, found evidence that it had been occupied in Neolithic times, and signs that the site was then abandoned until the Early Bronze Age. Then a two-storey palace, known as the House of Tiles because of the terracotta tiling on its roof, was built on the mound. Large amounts of a characteristic style of pottery were produced here, and the same patterns have been found at Tiryns (near Nafplio) and Zygouries (between Mycenae and Corinth).

After a fire destroyed the House of Tiles, it was never rebuilt. Later a small town was built around the site, containing no palace, but rows of small two or three-roomed, brick houses on stone foundations. What was unusual for this era were the town’s deep rubbish pits (Bothroi), and the architecture and art are similar to that of the present day Middle East.

Around 1600 B.C., two shaft graves were dug into the top of the House of tiles. The whole area became a cemetery in the Mycenaean age.

‘Distant from Argos forty stades and no more, is the sea at Lerna. On the way down to Lerna the first thing on the road is the Erasinus, which empties itself into the Phrixus, and the Phrixus into the sea between Temenium and Lerna. About eight stades to the left from the Erasinus is a sanctuary of the Lords Dioscuri (Sons of Zeus). Their wooden images have been made similar to those in the city.

On returning to the straight road, you will cross the Erasinus and reach the river Cheimarrus (Winter-torrent). Near it is a circuit of stones, and they say that Pluto, after carrying off, according to the story, Core, the daughter of Demeter, descended here to his fabled kingdom underground. Lerna is, I have already stated, by the sea, and here they celebrate mysteries in honour of Lernaean Demeter.

There is a sacred grove beginning on the mountain they call Pontinus. Now Mount Pontinus does not let the rain-water flow away, but absorbs it into itself. From it flows a river, also called Pontinus. Upon the top of the mountain is a sanctuary of Athena Saitis, now merely a ruin; there are also the foundations of a house of Hippomedon, who went to Thebes to redress the wrongs of Polyneices, son of Oedipus.

At this mountain begins the grove, which consists chiefly of plane trees, and reaches down to the sea. Its boundaries are, on the one side the river Pantinus, on the other side another river, called Amymane, after the daughter of Danaus. Within the grave are images of Demeter Prosymne and of Dionysus. Of Demeter there is a seated image of no great size.

At the source of the Amymone grows a plane tree, beneath which, they say, the hydra (water-snake) grew. I am ready to believe that this beast was superior in size to other water-snakes, and that its poison had something in it so deadly that Heracles treated the points of his arrows with its gall. It had, however, in my opinion, one head, and not several. It was Peisander76 of Camirus who, in order that the beast might appear more frightful and his poetry might be more remarkable, represented the hydra with its many heads.

I saw also what is called the Spring of Amphiaraus and the Alcyonian Lake, through which the Argives say Dionysus went down to Hell to bring up Semele, adding that the descent here was shown him by Palymnus. There is no limit to the depth of the Alcyonian Lake, and I know of nobody who by any contrivance has been able to reach the bottom of it since not even Nero, who had ropes made several stades long and fastened them together, tying lead to them, and omitting nothing that might help his experiment, was able to discover any limit to its depth.

This, too, I heard. The water of the lake is, to all appearance, calm and quiet but, although it is such to look at, every swimmer who ventures to cross it is dragged down, sucked into the depths, and swept away. The circumference of the lake is not great, being about one-third of a stade. Upon its banks grow grass and rushes. The nocturnal rites performed every year in honour of Dionysus I must not divulge to the world at large.’

Standing at the site, which looks out over the Bay of Argos, we get a clear impression of at least three of the different periods when Lerna was occupied. Firstly, it has one of the largest prehistoric mounds in Greece, whose age exceeds that of the Pyramids. The ruins of the small Neolithic house, with its fortified walls contrast starkly with the now-sheltered House of Tiles, which dominates the mound.

Among the well-preserved foundations of the House of Tiles, we can see the remains of the stairs which connected the two floors. There is evidence of the advanced method of sealing that was used on the walls. The shapes of the two Mycenaean graves cut into the tumulus (mound) of the building are clearly marked.

To appreciate the ceramics found at Lerna, we should include a visit to the Archaeological Museums of Argos and/or Nafplion. Notable for their distinctive curving spouts and rims, the finds from the House of Tiles include sauceboats, bowls and jars, with curving rims and handmade branded, rather than painted, patterns. In contrast, we can see the painted dark glaze patterns on the pale clay from the Middle Bronze Age.

Modern techniques have enabled geologists to identify the site of the vanished sacred Lake Lerna, which was a freshwater lagoon separated by barrier dunes from the Aegean. In the Early Bronze Age Lake Lerna had an estimated diameter of 4.7 km (3.0 mi). Deforestation increased the rate of silt deposits and the lake became a malarial marsh, of which the last remnants were drained in the nineteenth century. 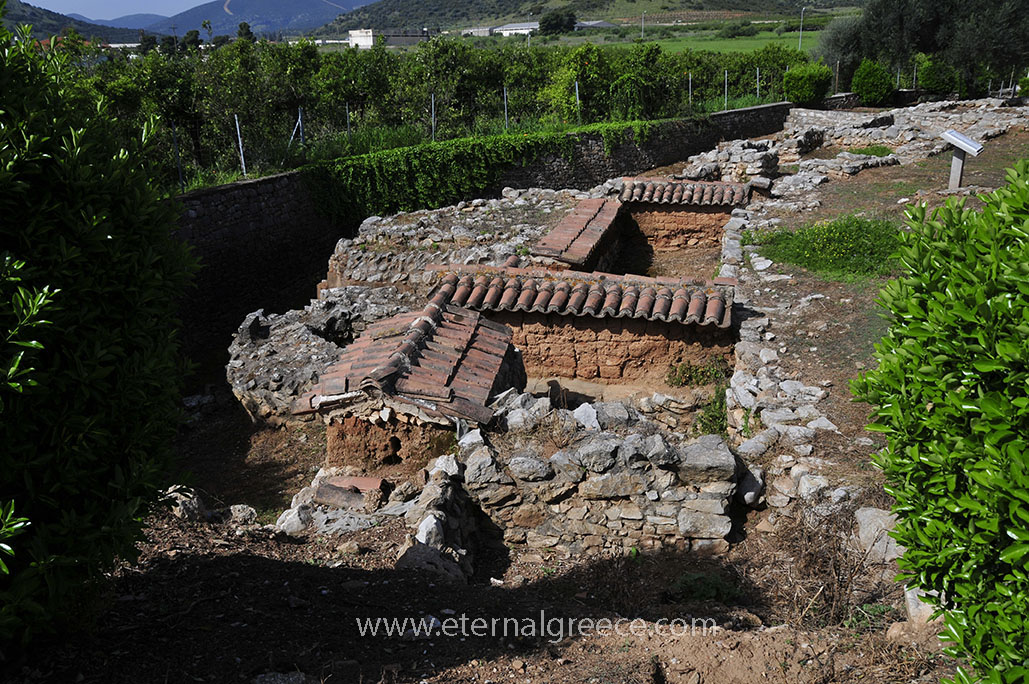 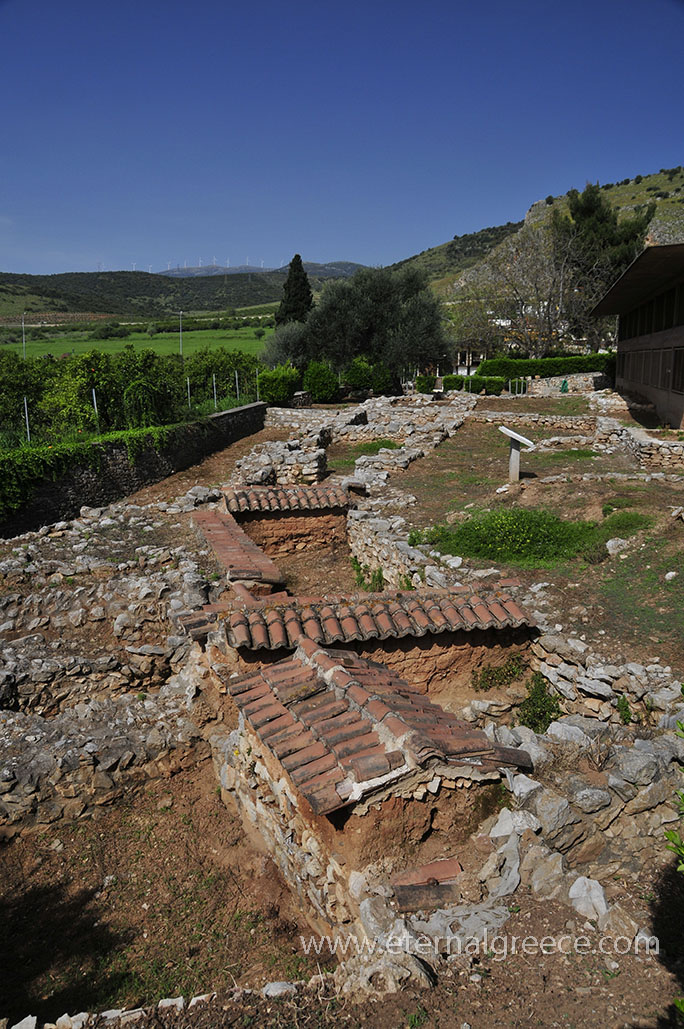 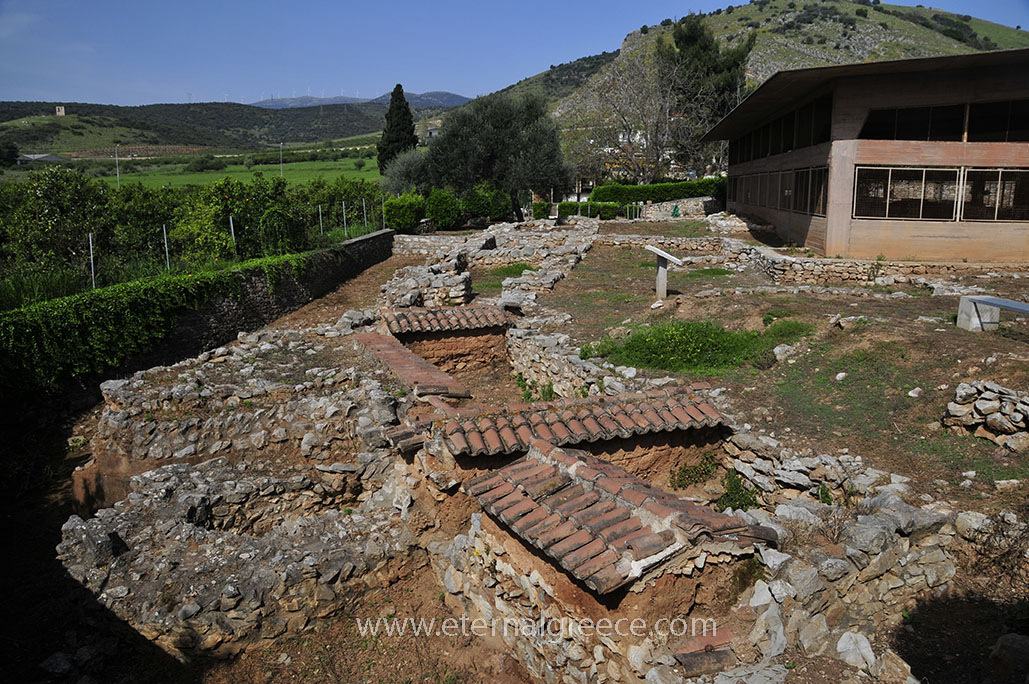 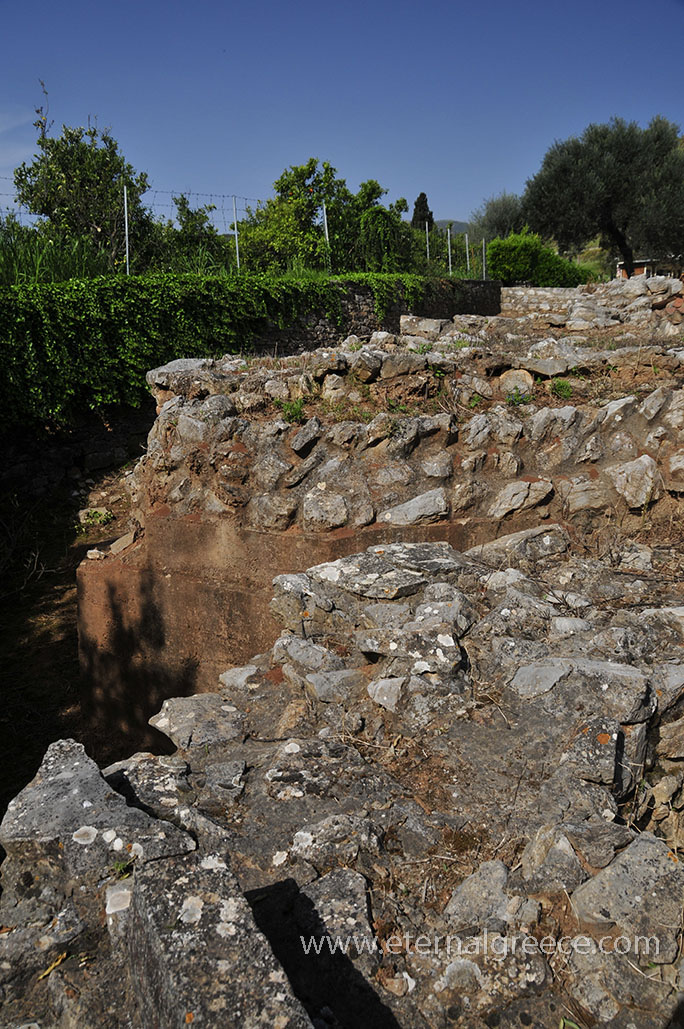 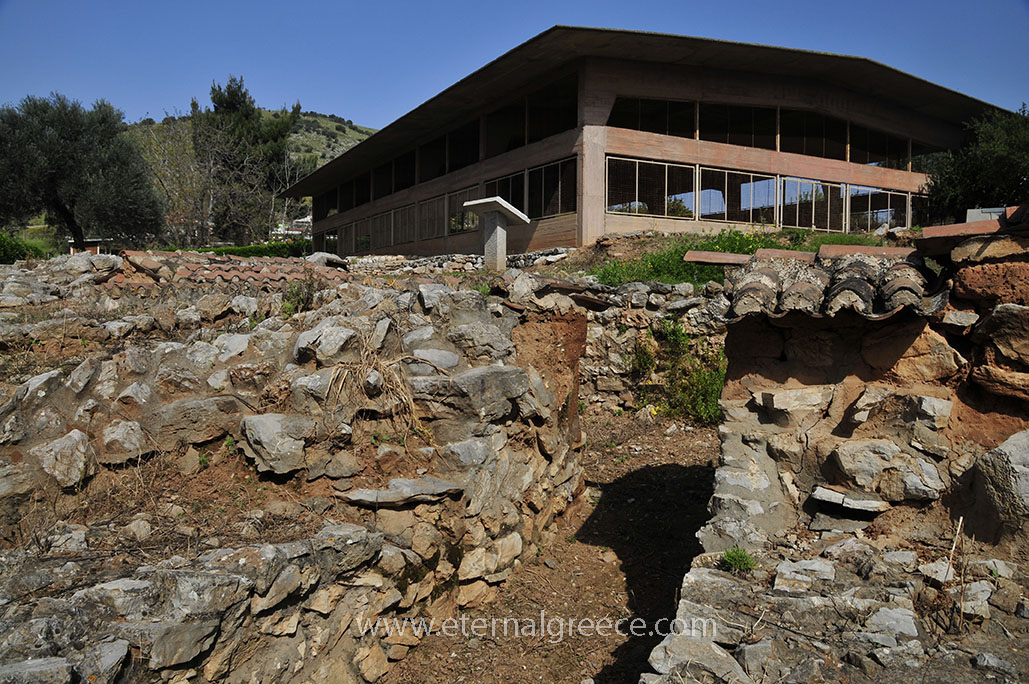 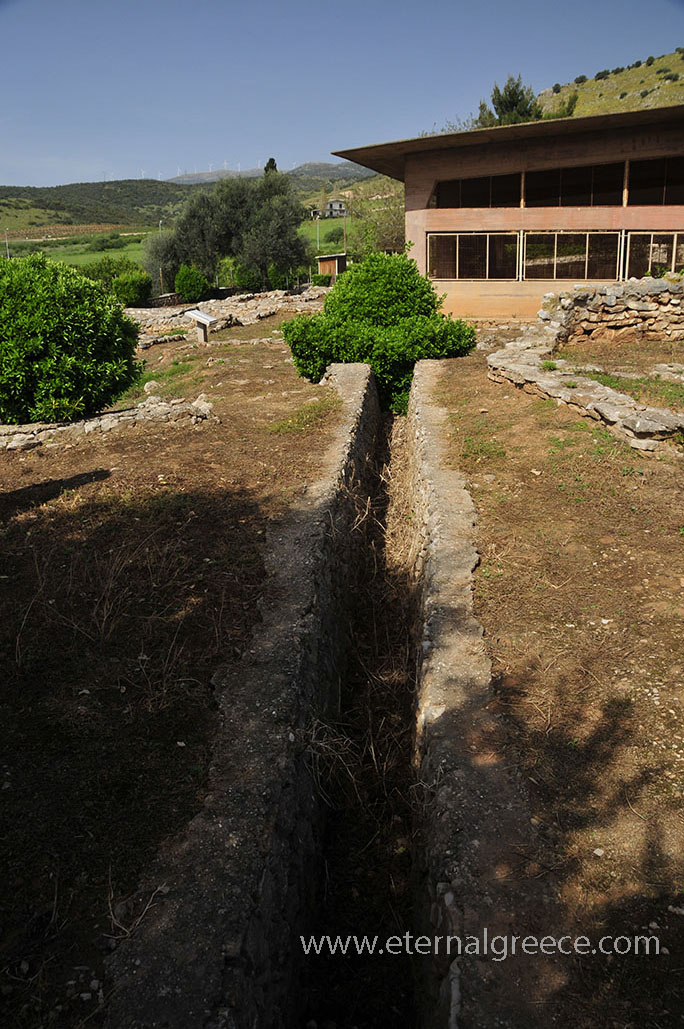 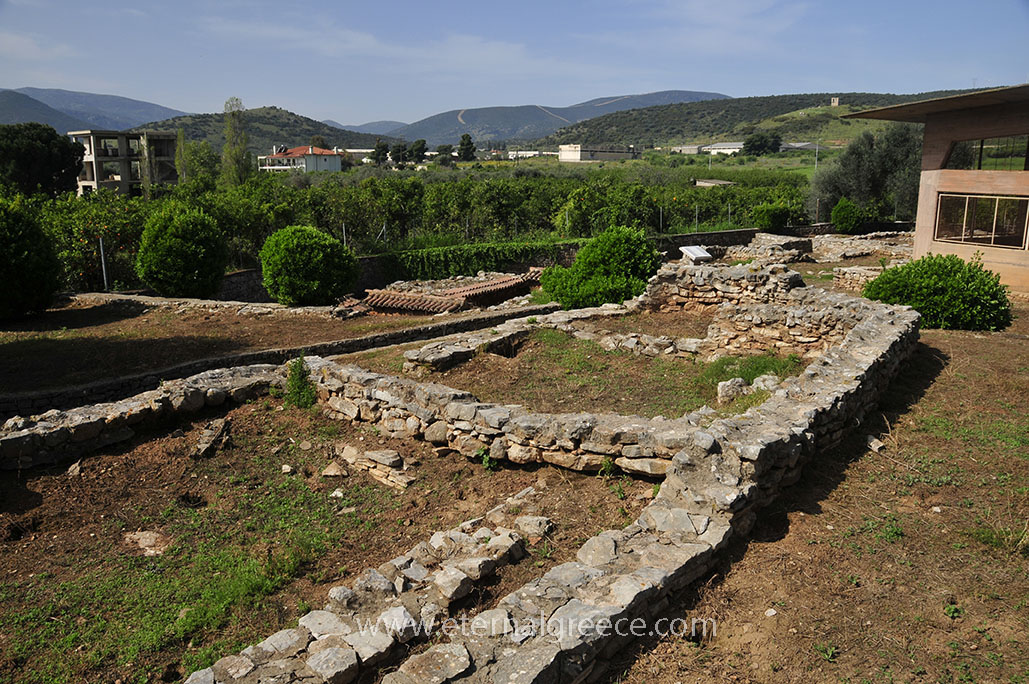 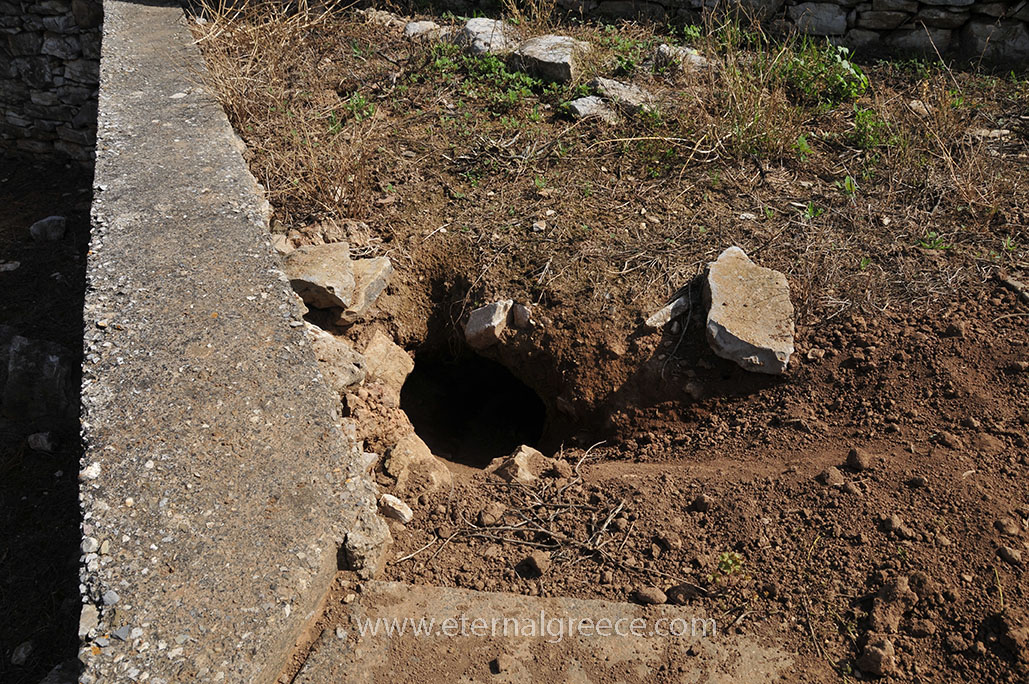 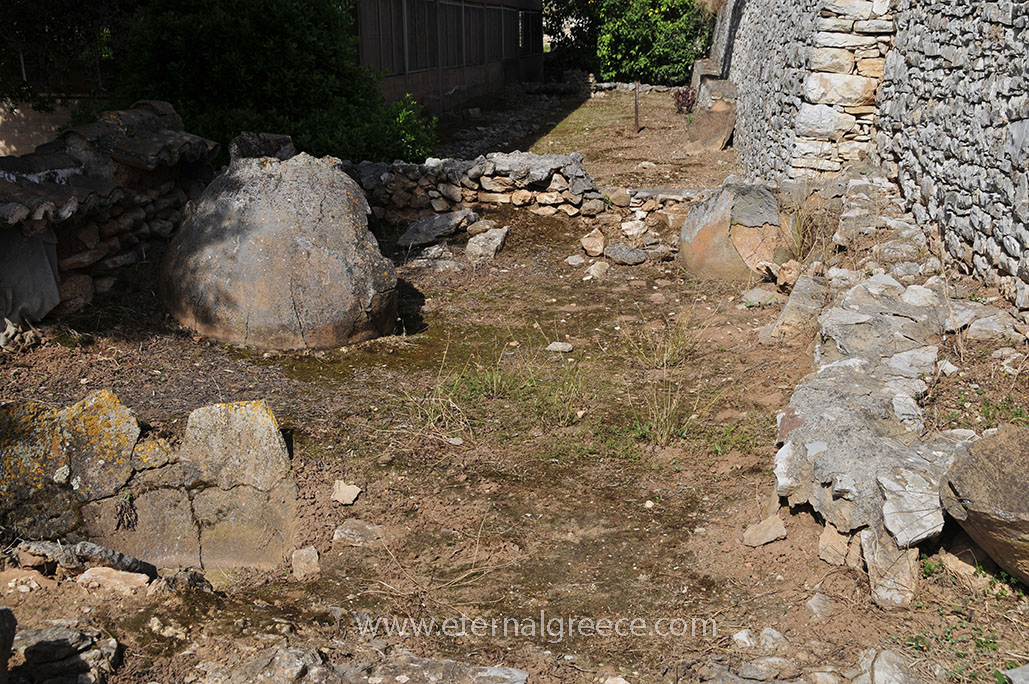 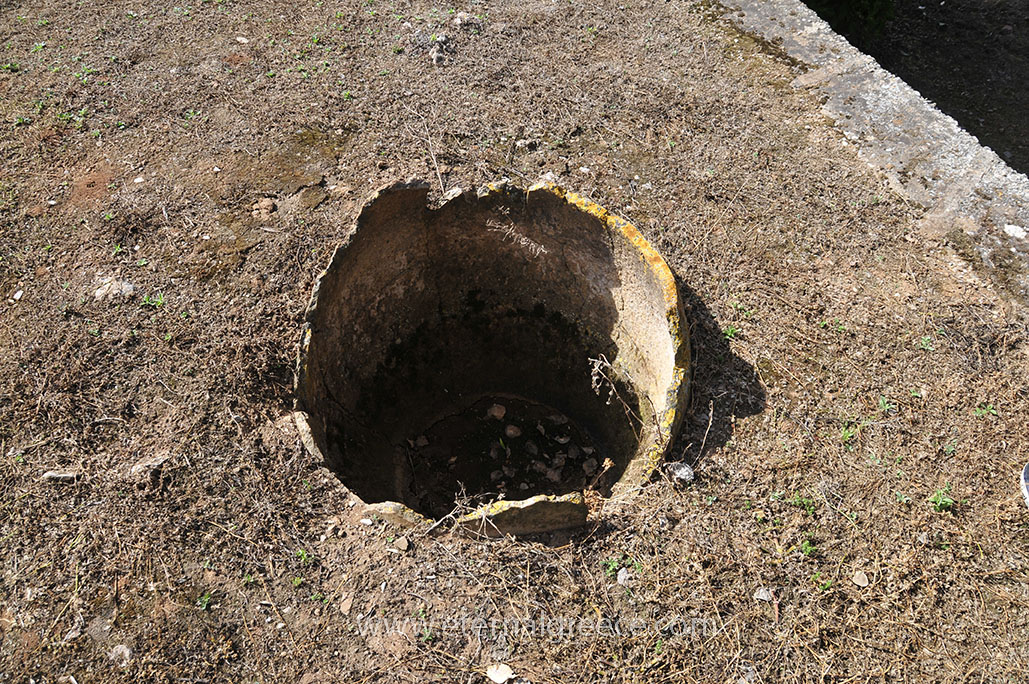 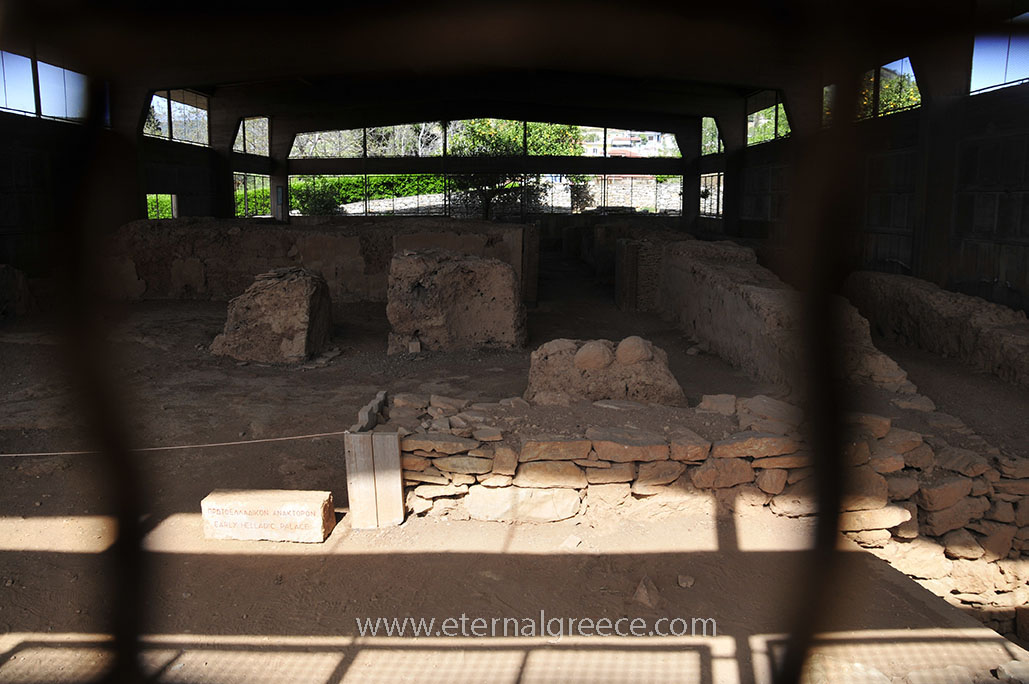 My Tweets
© :2016: Eternal Greece Ltd. All rights reserved
We use cookies to ensure that we give you the best experience on our website. If you continue to use this site we will assume that you are happy with it.Ok